FREE SHIPPING ON A WIDE RANGE OF PRODUCTS

Posted on 15 July 2021 by Buzzbee International Mated queen bees can be purchased from many reputable breeders however be warned, the demand for queens at specific times of the year (usually the mid/end spring) can be high so, if possible, plan for this circumstance.

Buying a new queen bee can be a good thing, where new genetics in your bee yard can breed in resilience, stronger colonies and breed out traits you might not desire.

So, you have confirmed that you need to introduce a new queen to an existing colony. The first step is for you to order your queen where the breeder should be able to provide you a rough time frame when your queen/s should be available. Based on this timeframe, you can plan the preparation for her arrival.

We recommend that you do not proceed beyond this step until you have the queen bee in your hands. You need to check her condition, that she is healthy, moving around and you may need to even provide her a few drops of sugar syrup or water on to the cage to rehydrate her. If they are cold, then ensure that the cage of bees is placed in a warmer area to encourage more movement.

You may observe a few dead worker bees however this is not unusual because these bees may be older than the queen or they have sacrificed themselves to assist the queen. If some workers are dead or appear to be dying, your new queen needs to be introduced as soon as possible.

Before any queen bee is introduced into an existing colony, the old/original queen bee needs to be removed. If this is not undertaken, the original queen and potentially the whole colony will try to attack the new queen and kill her.

It is therefore essential that a carefully and thorough inspection is required to ensure no queen or queen cells are present. Anything resembling a queen cell should be removed.

If not queen-less, find the original queen bee and remove her. You will quite likely have to destroy her where she needs to be taken at least several meters away so that her pheromone is not left near the original hive. Another humane way to destroying the queen is placing her into the freezer, where she will slowly fall asleep and die.

Once the queen is removed you should allow between 2 to 24 hours where the colony is left queen-less. This is to ensure that the pheromone of the old queen dissipates, and that the colony recognises that they now have no queen. This might provide them some anxiety; however, they should become more receptive of the new queen once she arrives. Some claim that if left greater than 24 hours the risk of the queen being rejected starts to increase. The reason for this is that sometimes colonies will start building an emergency queen cell with one of their eggs.

If a colony was originally queen-less, then no delay will be needed as you can move forward straight into the insertion phase.

If you are trying to re-queen an aggressive colony, it might be recommended to leave them queen-less for at least 48 hours. Colonies that are more aggressive tend to need more time to recognise the need for a new queen. Sometime this is not enough, and longer periods may be required.

Quick Release vs Time Release method - The quick release method is controlled by an additional cap/door where on opened, has direct access to the queen inside. Almost all the time we HIGHLY recommend ignoring this quick release method because the whole purpose on using this cage is to release the queen bee into an existing colony over a slow time period. The reason for this is that both the queen and colony need to become familiar and comfortable with each other. This time delay of usually 2 or 3 days tends buys enough time to break down any aggressive behaviours and encourage the acceptance of the new queen. This slower method greatly improves the chances of a successful queen introduction. By missing out this step and trying to force the rapid introduction of the queen often results in the balling and killing of the new queen bee.

The only time we might use the quick release method is if the queen has been in the hive and cage for over a week. By then the colony should have accepted her and would be familiar with her pheromone. An alternative is to use a small stick and push a small hole through the Queen bee Candy to reduce the time that they need to eat through.

When the big moment arrives, there are three ways in which the cage can be inserted. All three methods although slightly different, still require that the cage is placed near the centre frames of the brood. This is usually the bottom brood box between frames 4 and 5 on an 8-frame hive or between frames 5 and 6 on a 10-frame brood box. The reason is that you want to place the queen where the majority of the bees are working and nurturing the brood. In addition, you want the queen to emerge from the cage right in the thick of the busy part of the hive.

Method 1 – Placed between the top bars of the frames Method 2 – Placed on the top bars of the brood frames Method 3 – Inserted into the comb/bottom of a frame The principal purpose of this method is that the new bees that will emerge from the brood within the cage will immediately accept the queen (they will not know she isn’t an established queen). Then releasing her into the hive along with these bees who have already accepted her, should increase the chances that the colony as a whole will accept her. This method is particularly suited to more aggressive colonies or hives that have been queen-less for longer periods of time.
This is a relatively new method that has been experimented in various formats by many beekeepers in recent years. We have not yet used this method ourselves but have heard good reports from other beekeepers who highly recommend it.

The queen, her host bees and the colony will take between 2 to 4 days to eat through the queen candy food to allow her to escape the cage. It is recommended to minimise any disturbance in the hive for at least two weeks however we recommend, if possible, to undertake a quick look at day 4 if minimum disturbance can be undertaken. This is usually only possible using the method 1 and 2 method where the cage and frames do not need to be moved.

If the queen has escaped, then everything is going to plan and leave the hive for a further 10 days. This is to ensure the queen is not disrupted, she a customises to the colony, and then start laying. Do not feel the urge to get into the hive quickly as this can disrupt her cycle.

However, if after 4 days, the queen has not escaped and the food cake has not been touched, then one technique can be used to encourage the escaping process. Simply and carefully whist ensuring not coming in contact with the bees inside the cage, insert a small stick through the queen bee candy to allow a small hole though the centre. Ensure that the hole is not big enough that worker bees and the queen can get out but reduces the amount of eating they need to undergo. Recheck the hive in another 3 days to ensure everything is back on track.

If the queen bee has still not escaped after 1 week from the initial insertion, then the only option will be to open up the quick release exit. Open and leave back in the same position.

Note: Be aware that the timeframe that she may start laying eggs can be influenced by a number of factors. These can be cooler weather conditions, whether the hive inside is warm or cold, strength of the current colony and many more factors.

Please note that the above techniques that are highlighted in this article, is not a guarantee that your queen bee will have a stress-free and safe introduction into a hive however we are highlighting potential solutions that may or may not be beneficial.

Ask us a question, when it's convenient for you.

After the season we have had here in Melbourne I've had the chance to test plenty of different types of feeders. This feeder would have to be my favourite due to it's size and the ladders for the girls (minimal fatalities). The only issue I've come across is that it is a tight fit in my 10 frame hives. 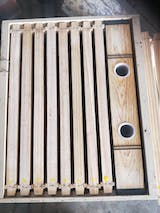 I have had the BEE-pack now for just over two weeks. My initial experience has been very good. The Nuc transferred into its new hive without any issues, and the hive quickly established its daily schedule and I could see the worker bees returning with pollen. The hive is currently receiving supplemental feeding to help with its establishment. I look forward to inspecting the hive more thoroughly shortly. From my early interactions, it appears the hive has a good temperament.
Andrew

T
Beekeeping Round Hat and Veil with Strap under the Chin Tom G.
Hat with veil